In my previous post I have mentioned some early signs that Check Point is going ready to confront its competitors more actively. 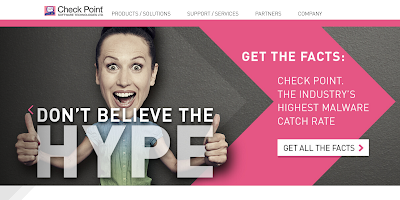 Following the link, one gets to a page where multiple security vendors are mentioned openly. although the actual detailed report is available only after registering one's name and email.

This is definitely a new page in Check Point fight for its market share.

------------To support this blog and Check Point Video Nuggets project, send your donations to https://www.paypal.me/cpvideonuggetsYou can also subscribe to Indeni tech news via this link.

Posted by Valeri Loukine at 1:11 AM 2 comments:

Who is behind Check Point in a "bash-a-competitor" game?


There is marketing and aggressive marketing.

As you know, some security companies do the latter, with miraculous results. One known company not only managed to usurp "Next Generation" name used by Check Point back in 2000, but also claim even bolder things, like invention of stateful inspection and modern firewalls.

Not surprisingly, market responds positively to your one's bold messages regardless of actual technological superiority behind them.

Some ask, why Check Point is not doing something similar? Doesn't it have something bold to talk about and to show? Where is all competitive bashing and crashing information?

I personally think that most of CP decision makers seem it beneath them, letting technology to talk for itself. We all know that does not really work.

It is still to early to say whether the company is ready to change its marketing  strategy, but apparently there are some modest attempts to go into "hit it with a stick" type of game. Here are some examples.

Moti Sagey, a celebrated security evangelist at Check Point, posted some time ago a link to a video bashing efficiency of PAN firewalls. That stirred long discussion where Moti was accused of running "anonymous"  YouTube channel with some other similar videos of that kind.

Apparently there is another YouTube channel, also seeming to be anonymised, comparing different security vendors ATP features with Check Point.

My question is whether those attempts are some personal efforts or they are authorised by CP. And if latter, why the company is keeping it on a low flame. Is there a wish to enter "bash-a-competitor" game after all? I wish I knew.

Anyhow, if you go by the links, you can enjoy some recent and very educational videos.


------------To support Check Point Video Nuggets project send your donations to https://www.paypal.me/cpvideonuggetsTo support this blog subscribe to Indeni tech news via this link.
Posted by Valeri Loukine at 9:11 AM 1 comment:

Last month I have mentioned that R80 Release Notes document does not mention HW details for R80 installation.

I am glad to let you know this is no longer the case. Last week Check Point added a small section "Open Server Hardware Recommendations" to the document. 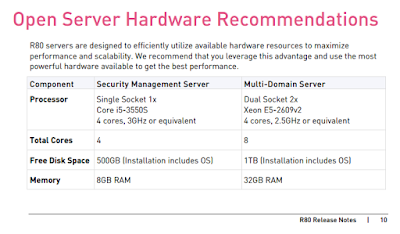 Well done, Check Point. Also, thanks to Dan Suleiman for bringing this to my attention.

------------To support Check Point Video Nuggets project send your donations to https://www.paypal.me/cpvideonuggetsTo support this blog subscribe to Indeni tech news via this link.